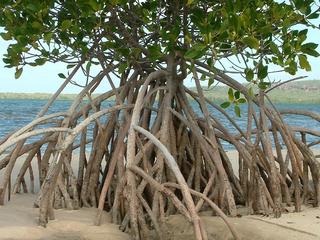 Trees play such an important role in the health of our planet and of our own selves. Because of that, it's especially nice to learn that some people are promoting projects with positive results far into the future. One of those projects is happening in Singapore. It was reported in the Singapore newspaper, Mongabay, this Oct. 9. To learn more about the newspaper, go to https://news.mongabay.com. It provides news and inspiration from nature's frontline.

According to the article, between 1953 and 2018, Singapore lost nearly 90 percent of its mangrove trees to urban expansion and other human activities. To help turn that around, Singapore launched a new nature park. It covers 990 acres in an area where migratory birds stop to refuel. They fly from Russia and Alaska to Australia and New Zealand along the East Asian-Australasian flyway. It is also home to oriental hornbills, otters, crocodiles and many other species. The nature park is part of a larger effort to plant one million trees across the city-state of Singapore by 2030. The reforestation will not only add wildlife habitat, but will help sequester carbon, lower the city's temperature, and help to reduce erosion and rising sea levels, and improve living conditions for human residents.

In August 2020, the Singapore government announced the launch of the new nature park, which is called the Sungei Bulon Park Network, located in the northern part of the island. The Sungei Buloh Wetland Reserve is home to smooth-coated otters, who were found there in the 1990s after they were thought to be locally extinct. It's also home to 11 of the 200 critically endangered Eye of the Crocodile trees in the world. The Sungei Buloh Park Network triples the size of the protected area and aims to protect the biodiversity of many areas, among them the Kranji marshes, the Mandai mangrove and mudflat, and the coastal Lim Chu Kang Nature Park. Within these habitats, researches have recorded 279 bird species. They include many different kinds of ecosystems. In Lim Chua Kang Nature Park are mangrove, woodland, scrubland and grassland habitats. It attracts many coastal birds, among them the gray-headed fish eagle and the baya weaver.

Thirty-five different plant species of mangroves have been found in Singapore, while in the United States, only three different species of the mangrove plant species have been found, according to geography professor Dan Friess from the National University of Singapore. He has studied mangroves for 11 years, and he heads the university's Mangrove Lab. It focuses on studying coastal wetlands in Southeast Asia.

Because of the many different species in Singapore, those mangroves have an important ecological impact. Twenty species new to science have been found by researchers in the Mandai mangroves alone. Now, visitors can view the Sungei Buloh wetlands from boardwalks and watchtowers. That will change in 2022, when they can watch migratory birds from hides near the Mandai mudflat.

In the 19th century, Singapore lost much of its primary forest to logging. A fast-growing population and rapid urban development in the 20th century caused the removal of many trees for land reclamation and to build reservoirs for water security. As a result of that development, mangrove forests, which in 1953 covered about 24.5 square miles, covered only 3.1 miles by 2018. Singapore's goal is to replace its losses by turning areas used for industry and infrastructure back into landscapes that look more natural.

Part of that effort includes the One Million Trees project launched on March 4, 2020. It involves restoring both inland and mangrove forests. The trees are coming from Singapore's tree banks, which include nurseries and trees salvaged from construction sites. Transport and housing projects could result in the removal of up to 13,000 trees over the next 15 years, but the government plans to replant one tree for every tree removed. The One Million Trees project will be placed in parks, on university grounds, rooftop gardens, roadsides and on outlying islands. The project will also create therapeutic gardens for aging people in Singapore. It is the city's goal, when the project is completed in 2030, that every household will be within a 10-minute walk of a park. It is hoped that the trees will help to cool the environment and attract butterflies, garden birds and small mammals so that biodiversity and nature can be enjoyed in an urban landscape.

Mangrove trees have characteristics that make them especially beneficial in this project. Their roots help to stop erosion by holding in the soil. They also reduce the impact of waves on the shore. They trap sediment between their roots and create their own soil. That could help coastal cities like Singapore stay above water as global warming leads to the rise of sea levels – if that rise does not occur too quickly.

Research indicates that mangroves can sequester more carbon that rainforests do. Friess said that mangrove trees can store three to five times more carbon per hectare than other forest types of trees do. A hectare equals 2.47 acres. That ability could reduce excess carbon in the atmosphere around the world where reforestation projects take place.

In the Mongabay article, Friess is quoted as saying, "In a normal forest, leaves and branches would die, fall to the forest floor, and quickly get broken down by bacteria and fungi, which releases the carbon back into the atmosphere. Mangrove soils are waterlogged so they have a different microbial community, so organic matter is not broken down and the carbon stays locked up in the soils."

If Singapore can carry out this bold and planet-healing project, then other places around the world with the will to do so also could create their own reforestation projects. Even on a much smaller scale, reforestation projects could make a positive difference. Trees are even more important for our health and welfare than many of us realize.