Gardens and Trees Unite Us 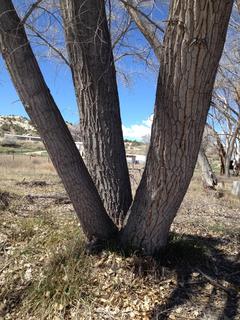 I have a little backyard garden where I grow tomatoes, potatoes, green beans, asparagus, sweet red peppers, beets and carrots. It has been fun sharing some of my bounty with neighbors. The young neighbor family whose backyard abuts my backyard, is fun to interact with. They have two preschool kids who get so excited when I give each of them a carrot or a tomato. Sometimes their dad sends them to the fence between our yards with a couple of sweet juicy apples from one of their trees.

I sometimes think about that apple tree and how it and my garden have become a sharing conduit between my neighbors and myself. How wonderful that we can still be connected in ways that help us all feel cared about and appreciated.

I walked with friends today through the neighborhood for exercise. Seeing so many trees along the way made our walk even more beautiful and provided shade when we needed it. Trees have so much to offer us. I wanted to capture some of what they can provide in my book, Healing with Trees: Finding a Path to Wholeness. When people see me around town, they sometimes make a special effort to tell me how much that book means to them.

Trees have so much to offer, and I am delighted when people discover they too can have a connection with trees. People may enjoy a shady spot under tree branches to rest in. Or they may sense a welcoming feeling coming from certain trees. It can be an adventure to notice trees as you take a walk. One thing most people notice is how many trees there are all around us. It's fun to see what happens as you acknowledge the trees you pass and appreciate their beauty. 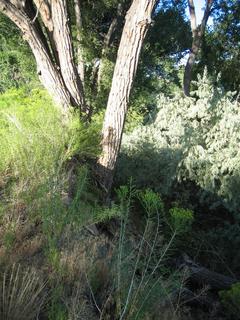 Cottonwood along an irrigation ditch bank

As I sat in my chiropractor's backyard waiting for him to see me, I noticed many beautiful trees growing in his yard. I saw a peach tree laden with ripe peaches, an aspen, a spruce, an elm, and blossoming sunflowers tall enough to be trees.

Do they ever wish they were a different kind of tree? I wondered. I suspect not, because the trees have such distinct personalities and tasks that are just right for them. That may seem a little silly, but I believe it's true. Ask almost anyone who spends time around trees, and they most likely will tell you that trees have their own sense of purpose and their own individuality.

As I gaze at the aspen with birds flitting in and out of its branches, I wonder how it would describe itself. Words came into my mind. Were they from the tree? From my own imagination? I don't know. If it was from my imagination, it's kind of fun to take a tree imagination journey to see what you will discover.

What I heard in my mind about the aspen tree was, "I am welcoming. I stand with open arms. When challenges come, I recognize the gift in the challenge." As I watched its quaking leaves, I sensed it had lots of experience in seeing gifts in the challenges it faces – strong winds, people wanting to cut it down, drought, extreme temperatures.

The towering spruce behind it seemed confident. As I wondered how it would describe itself, I noticed how its topmost branch pointed straight up to the sky. Trees are very good at grounding themselves deep into the Earth with their roots. They are also good at connecting upwards into the sky to the place from which they absorb rain and snow and other gifts from nature. Perhaps that connection is what made the spruce feel so confident.

The tall elm behind me standing near the backyard entrance was filled with several kinds of birds. One small bird with bluish gray feathers on its body and a white patch on top of its head grasped ridges of trunk with its feet and walked upside down toward a fork in the tree. How interesting, I thought. It trusts the tree and its surroundings well enough to walk upside down!

If you're looking for something fun, free and entertaining to do, try taking your own tree imagination journey. It's safe and relaxing.

CAN PLANTS PROBLEM SOLVE AND COMMUNICATE? 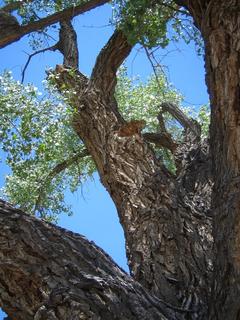 If you've spent time among trees, you may have enjoyed their individual shapes and colors. You might even have felt more peaceful, more connected to nature.

Trees, flowers, bushes, all kinds of plants can help us to feel more consciously aware of our connection to nature. It's easy to rush through an experience because we're so busy, but if we give ourselves time to spend with trees, we might feel calmer and more relaxed. The fiction and non-fiction books I've written about trees or with trees as a character all developed as the result of calming, healing experiences I've had around trees. Those experiences told me there's a great deal more to trees and their abilities than many of us realize.

Though some people perceive plants as incommunicative, insensitive and in a vegetative state, more scientists and biologists are coming to recognize they are much more than that. One of the most recent books about this growing awareness, The Incredible Journey of Plants, was written by plant neurobiologist Stefano Mancuso, who studies the intelligence and behavior of plants. He is the director of the International Laboratory of Plant Neurobiology (LINV) in Florence, Italy.

An article about his book appeared April 5, 2020 in a United Kingdom publication, The Guardian. To see it, go to https://www.theguardian.com/environment/2020/apr/05/smarty-plants-are-our-vegetable-cousins-more-intelligent-than-we-realise.

He has studied how plants are able to problem solve, memorize, communicate, and how they have social lives. Unlike humans, plants do not have a brain. Instead, Mancuso said, they convey that brain-type function throughout their entire structure. They are, in a sense, one huge brain. In addition, they are aware of themselves and of what is around them. In The Guardian article, Mancuso is quoted as saying, "My personal opinion is that there is no life that is not aware of itself. For me, it's impossible to imagine any form of life that is not able to be intelligent, to solve problems."

Plants are more sensitive than animals, he says. "That is not an opinion," he told The Guardian. "This is based on thousands of pieces of evidence. We know that a single root apex is able to detect at least 20 different chemical and physical parameters, many of which we are blind to."

In his book, Mancuso explains that plants are social and communicative both in their structures above ground and through their roots. Other life forms have subtle electromagnetic fields, and plants are able to detect them. They warn of danger, try to scare off predators, and attract pollinating insects by using chemicals and scents. When caterpillars chew on corn, for example, the corn sends out a chemical distress signal that is responded to by parasitic wasps who follow that signal and attack the caterpillars.

Plants detect sound and vibration too. That's how they find running water, which they need to survive. Because they have such a slow pace of life, it's easy for people to overlook the intelligence of plants. They have learned how to survive for centuries in sometimes stark environments.

The idea that humans have reached the highest form of life on Earth is a very dangerous idea, Mancuso believes. "When you feel yourself better than all the other humans or other living organisms, you start to use them," he told The Guardian. "That is exactly what we've been doing."

Though Mancuso has his detractors, more and more botanists are embracing the study of plant neurobiology. People are becoming more open to the idea of plants as intelligent species that have their own ways of behaving.

Hi Margaret,
Per your blog, I absolutely know that plants move and respond. I watch my houseplants that send out runners directly to an adjoining pot and start putting roots in that one’s soil. Thanks for visiting my author page. Take care,