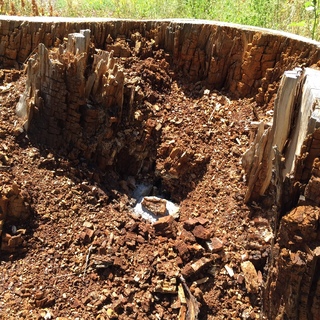 In Spite of Fire, Some Redwoods Survive 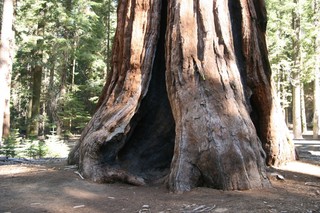 In August 2020, the CZU Complex fire burned 18,000 acres of the Big Basin Redwoods State Park. Located in the Santa Cruz Mountains of California, it is the state's oldest park. It contains redwoods that are sometimes more than 2,000 years old.

Even today, almost one year after the fire, some of the park's trees still smolder, according to a June 18, 2021 article in The Guardian Weekly. Some of the challenges now are to decide how to rebuild the park to make it more accessible to visitors and how to make it more resilient.

Some huge redwoods that people saw in 1902, when the park was founded, will never be seen by visitors again, except in pictures. They perished in the fire that gobbled up 97 percent of the park. The fire also destroyed the park's headquarters building, other facilities, and a variety of structures such as foot bridges that guided visitors through the trees.

The fire's CZU abbreviation refers to the California Department of Forestry and Fire Protection's San Mateo-Santa Cruz Unit. That unit is the administrative division for San Mateo, Santa Cruz, and San Francisco counties.

There is a concerted effort by people in California's state park system to save as many of the park's old-growth trees as possible. Many are favorites of visitors. One of them is the Auto Tree. It has been photographed at different times with horses and buggies and with trucks backed into its large opening that was created by previous fires. Though the Auto Tree suffered in the fire, green offshoots at its base indicate it is very much alive. Time will tell if is strong enough to remain standing.

When the park was founded, fewer visitors came to state parks. Today, people throng to state parks. Providing them with an enjoyable experience that is safe for the trees and for visitors requires more planning than it did more than a century ago. On top of that, climate change creates difficulties such as hotter temperatures, more drought conditions, and bigger fires.

Even so, there are glimmers of hope as wildflowers push through fire blackened remains on the forest floor in Big Basin Redwoods State Park. Green sprouts emerge from fire damaged trees. Sounds of insects and chirping birds fill the air.

Eventually, people will visit the park again, though it will not look like it did earlier. In these challenging times when the changes in our climate can create catastrophic damage, the creative human spirit and the resilience of trees still give us hope.