How the Shea Tree Saved a Village 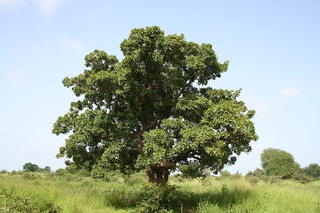 With the help of a Ugandan development expert, the shea tree saved a war ruined Uganda village.

Arbor Day is this Friday, April 30. It's a day to celebrate trees. That made me think about how I can celebrate trees. What I love to do is tell the trees in my front and back yards hello every time I walk near them. I thank them for being in my yard and for all the things they do to help make the space they occupy a better place.

During this week, I also enjoy reading about the special role some trees play in their community. There's a wonderful article in the March 12, 2021 The Guardian Weekly about how a man named Ojok Okello helped his Ugandan village of Okere Mom-Kok revive and thrive after more than a decade of war left it in ruins. He is doing it with the help of shea trees that grow in and around the village. The project is a social enterprise, and villagers work together to make their own decisions about the enterprise.

Okello told The Guardian Weekly, "I looked at the shea tree and realized that we have this important natural resource, and we were not harnessing it." The inspiration for using shea trees came to him from the Marvel block-buster movie, Black Panther. He was sitting under a shea tree outside his house one afternoon in early 2020 when the idea began to materialize. "I thought about Wakanda and Black Panther. They had vibranium. This shea tree could be our vibranium," he said. He decided to invest everything within his means to tap the resource of the shea trees, protect them, and use them to help his village come back to life and prosper.

The villagers make Okere Shea Butter and sell it in the capital, Kampala. Shea butter is made from a fatty substance that comes from nuts that grow in shea trees. It is often used in cosmetic skin preparations.

Shea trees are classed as an endangered species, which is threatened by extinction. Okello advocates for the protection and regeneration of the trees. Already the shea butter is catching on in Kampala, and Okere Mom-Kok is becoming a thriving and sustainable town of 4,000 people. Villagers have renamed their now thriving town Okere City.

Okello is the mover and shaker behind the plans that resulted in Okere City, which began in January 2019. Its 200 hectares, slightly over 494 acres, include a school, health clinic, a bank, and a community hall that also serves as a cinema, church and nightclub. The town even has a boxing team.

Electricity generated from solar energy is available to everyone, and the village now has clean water from a borehole, a deep, narrow hole made in the ground to locate water or oil. School is not free. Pupils pay cash for half of their school fees. The remainder they pay in maize, beans, sugar and firewood. Residents pay their clinic bills in installments.

The project would not have become successful if Okello had not initially funded it from his own pocket. Last year, the cost was about $54,000. Okello is a London School of Economics graduate who has worked as a development expert for several international charities and non-government organizations. He saw many projects fail because communities were not involved in decisionsabout their own future. That disillusioned him.

Okello was only a baby when he left the village of Okere Mom-Kok after his father was killed in the bush wars of the 1980s. After finding success as a development expert, he left that career and returned to the village, hoping to meet his extended family there. He wanted to use his extensive skills to create a project that was truly led by the villagers of Okere Mom-Kok.

He succeeded so well that now the village generates revenue. All of the projects, from the school and clinic to the local bar, all fund themselves. That's because the project Okello developed is not built as a charity but as a social enterprise in which every villager has a say in how the project is shaped now and into the future.

Villagers have a weekly investment club meeting in the community hall. Most of the more than 100 club members are women, many of them farmers. A few run small businesses. One woman got a loan from the club to buy shea seeds. She sold them at a profit, and she repaid her loan. Members make financial contributions before the money is redistributed as loans for members. Once they repay their loan, the money recycles back into the club so more members can get loans.

The shea tree played a vital role in this success story. Okello used his skills, the enthusiasm of the villagers, and the resource of shea trees to help his village resurrect itself from ruin to vibrant revival. Without the shea tree, that success might never have happened.